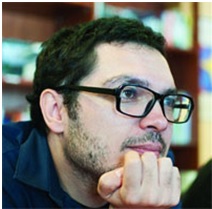 Sasha graduated in comparative and world literature in the Faculty of Philology, as well as graduating as a film director at the Faculty of Dramatic Arts, both in Skopje where he also received a masters degree in film and TV directing.

His research field of interest is narrative forms of visual expression (video games, VR etc) arising from new digital technologies as well as new alternative ways and platforms for distribution of content.

He is the founder of the production and distribution company CutAway which deals with preproduction, production of films and distribution of content. The company is a pioneer in the development of new distribution models in this region. The company developed and launched SEE Cinema – a database of all films, festivals and film professionals from 13 countries of Southeastern Europe, including a social network and news aggregator, and developed and launched the first regional VOD platform Cinesquare available in 13 countries.

Sasha has participated in several seminars and workshops dedicated to new ways of production and distribution of content. He is the author of several short films and TV formats. He is also a professor at the Department of Film and Digital Media of the University of Audiovisual Arts EFTA Skopje.